In November 2018, the Perth Observatory Volunteer Group (POVG) were successful in obtaining a preservation project grant from Lotteries West.

The primary aim of the project was to preserve the analogue data that resides on 6-inch square (16 x 16 cm), as well as 6-inch by 3.5-inch (16 x 6 cm), astronomical photographic glass plates that are stored at the Perth Observatory and deteriorating with age. In addition, metadata relating to the image on the plate was recorded on the envelopes and in a series of observing books, this data is also being preserved. The plates were produced primarily by the Sir Howard Grubb standard Astrographic telescope built in 1897 in Dublin, and installed originally at the old Perth Observatory, Perth, Western Australia (opposite to the entrance of Kings Park) in 1899, and later when it relocated to Bickley in the Darling Range. 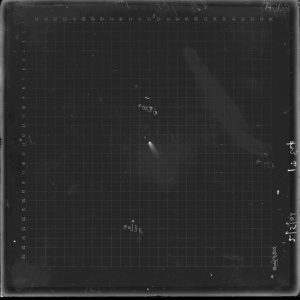 It was estimated that there were around 23,000 plates covering the period 1901 to 1999 that presided over many local and international astronomical programs including star catalogues, comets, asteroids, planet satellites, the Sun and Moon, and other galactic objects.

To that end, scans of the glass plates would be performed so that the data on the plates was duplicated in digital format. In addition, the grant also funded additional fire proof safes to protect those plates still on shelves, circa 60% o the total.

The picture above is a scan of the very first plate ever taken by the Perth Astrograph on May 2nd, 1901 of Comet 1901 A. The lines marked on the plate were used by the ‘computers’, people in those days and in our case ladies, to assist in measuring the stars positions.

A secondary aim was to record sufficient information to produce quality A4 sized prints on selected objects, as well as sufficient scientific data upon which to perform basic analysis, if desired, including scientific, cultural and historic research.

It is hoped, through further grants, the information will be made available for research and public access.

After commencing in April 2019, a dedicated team of 7 volunteers has, to date, scanned over 12,000 plates; today we had lunch to celebrate this.

#Perth #WA Join us at the York Recreation & Convention Centre Oval for an evening of free stargazing on Saturday th… http://t.co/OQnO8N7jai

✨What's in the sky this month? Check out @matty_woods for the @perthobs newsletter to find out. Read it here 👉🏻… http://t.co/RC6vWPWpNH